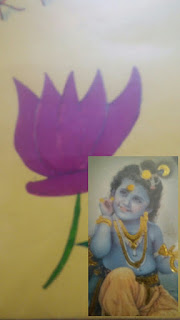 TOPMOST POSITION  Opulence of God Shri Krishna God Shri Krishna occupy topmost position in each category: God Krishna riches are limitless. He is beginning, middle and end of all living beings. He resides in the heart of all persons. Among Aditya, he is Vishnu Among lights, he is the Sun. Among Maruts, he is Marici Among stars, he is the moon. Among Vedas, he is Sama Veda Among demigods, he is Indra (king of heaven) Among senses, he is mind Among living being, he is consciousness Among riders, he is Shiva Among Yaksas and Rakshasas, he is lord of wealth (Kuvera) Among Vasus, he is Agni (fire) Among Mountains, he is Meru. Among teacher, he is Brhaspati (teacher of gods in heaven) Among Generals, he is Kartikeya (general of the army of Gods) Among bodies of water, he is the ocean. Among Sages, he is Brighu Among sacrifices, he is chanting of holy names Among immovable things, he is the Himalayas Among vibrations, he is transcendental "OM" Among trees, he is Banyan tree Among Sa
Post a comment
Read more
More posts